Regular Broadband-related news and comment from the Broadband.co.uk team.

February 2015 saw average download speeds recorded by users of our Broadband Speed Test drop by 0.48Mb in comparison to the results from January, coming in at 21.43Mb. Average upload speeds saw a 0.23Mb increase to 4.32Mb.

January 2015 saw average download speeds recorded by users of our Broadband Speed Test drop by 0.75Mb in comparison to the results from December, coming in at 21.91Mb. Average upload speeds remained stable at 4.09Mb.

December 2014 saw average download speeds recorded by users of our Broadband Speed Test rise by 0.43Mb in comparison to the results from November, coming in at 22.65Mb. Average upload speeds remained stable at 4.01Mb.

Overall drop in average download speeds for November 2014, with speed increases for TalkTalk

November 2014 saw average download speeds recorded by users of our Broadband Speed Test drop 0.62Mb in comparison to the results from October, coming in at 22.23Mb. Average upload speeds remained stable at 3.94Mb.

We're pleased to announce that Broadband.co.uk's price comparison service has once again been re-accredited by Ofcom!

Ofcom is the UK communications regulator. We've been Ofcom accredited since April 2010, and undergo strict, independent audits every 12 to 18 months, plus more frequent spot checks to ensure our broadband checker meets Ofcom's requirements to provide accurate, up-to-date, accessible and comprehensive information about the broadband deals that we list. This means you can be confident that our search results will provide you with accurate comparison costs and let you know what's included in each package, so you don't need to worry about visiting each broadband provider individually to find the best deals for you.

As well as our checker, the accreditation covers our deal comparison tables and our individual provider pages, which include detailed buyers guides with both pros and cons for choosing that supplier's services. Ofcom have also assessed our accessibility, ensured we can be contacted by both telephone and email, and that we provide a speed test and up-to-date consumer information relating to broadband.

Between the accuracy of our checker results and the detailed information we provide about providers and the deals on offer, we're confident you can find a broadband package that fits your needs using our services.

With improvements in technology and speed of broadband, it's becoming increasingly common for people to work from home rather than travel to an office. Whether you’re an employee connecting to your employer from home, or self-employed and running a business from your home office, it's important to be able to rely on a robust, stable broadband connection.

While you may find your home broadband connection is adequate for your work from home needs, you might be surprised to find that a business broadband package can offer significant additional benefits and be a lot more affordable than you'd think. We've created a guide to guide to Home Office Broadband explaining all the features and advantages of using business broadband when you work from home.

TalkTalk Business offers a range of products to suit your business needs, all including unlimited usage. Their Simply product is ideal for home office workers or small premises while their Complete package adds free premise moves, business call features and up to 4 static IP addresses. Up to 76Mb fibre options provided where available.

Right now you can save up to £754* compared to BT Business Broadband with TalkTalk Business Fibre! 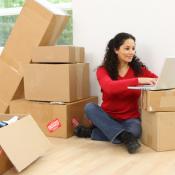 Moving home is daunting enough with arranging moving dates, packing, getting your belongings safely to a new location, and hoping that all the financial gubbins goes through smoothly so you can actually get into your new house as planned. The hassle of what to do about your broadband on top of all that is a stress that none of us really want to deal with. Making the decision of what to do then phoning up customer services, explaining the situation, relaying all the necessary information over the phone, arranging all the dates... it's all a recipe for one giant headache.

To help make the process a little easier for you, we've revamped our guide to moving your broadband when moving house to help you make the best decision for broadband at your new home and make it as easy as possible to move your broadband to your new home, whether you're signing up with a new provider or taking advantage of your existing provider's Home Move service.

We've gone into detail about the type of process, problems, gotchas and unexpected delays or charges you might experience during a broadband home move, and we've also provided handy bulletpoint summary sections to help when you're in a rush.

We've even gathered together details of the procedure for moving home for each of the home broadband providers we list, so you can quickly find exactly where on your provider's website you need to look or which phone number you need to call to set your broadband home move in action.

Posted by Edd Dawson on 2014‑04‑24 18:33 in AnnouncementsNewsHyperopticVirgin Media

As the top broadband speeds increase, new marketing terms like ultrafast, hyperfast and gigabit broadband are becoming commonplace. We understand how confusing terms like this can be, especially when most broadband buzzwords all seem to be another way of saying 'very fast', so we've produced a new guide to ultrafast and hyperfast broadband that should help to answer all your questions.

Meanwhile hyperfast broadband provider Hyperoptic has started to install their gigabit fibre to the building services outside of London, with select apartment buildings now activated in Bristol, Cardiff and Reading. These join over 250 postcode areas already hooked up in London, with more added every day. Hyperoptic offer the UK's fastest broadband at up to 1Gb (or 1000Mb) making this a truly hyperfast service, what's more their connections are symmetric offering the same speed regardless of whether you're downloading or uploading. You can sign up for a gigabit service for only £25 per month for the first 6 months.

If you only need ultrafast speeds, Hyperoptic also offer 100Mb broadband with prices comparible to Virgin Media's, from only £12.50 for the first 6 months, however these offer an unprecidented 100Mb speed for uploading, while Virgin only offers 6Mb uploads for the same price. Fast upload speeds are extremely useful to content creators and for users of could services. There's a section of our guide dedicated to ultrafast and hyperfast upload speeds.

If you're not sure whether Virgin Media or Hyperoptic's services are available in your area, our broadband checker will tell you if either are serving your postcode and will allow you to compare their prices and features with other broadband suppliers.

All prices quoted are introductory offers that require montlhy line rental. Hyperoptic charge £12.50 for line rental and Virgin Media £15.99. All services mentioned are also available without any telephone line installed at your home. Hyperoptic charges £40 for setup, or more if your home doesn't have a faceplate preinstalled. Virgin Media is currently offering free installation as a limited offer.

Virgin Media's average download speeds increased significantly over the previous month, rising by 4.94Mb, and they retain first place at the top of the speed table at 38.19Mb. Upload speeds were also up by 0.44Mb averaging at 4.14Mb.

Early last month Virgin launched their boost from up to 120Mb to 152Mb, from up to 60Mb to 100Mb and from up to 30Mb to 50Mb, which has undoubtedly contributed to their average download speed increases. While the boost was initially for new customers only, these average speed increases are set to continue as Virgin roll out the higher speeds to existing customers over the next year, with customers in several areas already enjoying the boost.

EE have taken third place, overtaking both Plusnet and Sky with average download speeds of 14.21Mb (an impressive 4.55Mb increase over last month).

EE have started traffic shaping to prioritise web and streaming traffic, allowing them to last month announce a new headline speed of up to 17Mb. At least 10% of their customers have to be able to achieve this speed in order for them to advertise it, making them faster than any other standard UK phoneline broadband supplier! We're currently running an exclusive £70 Amazon gift voucher offer with EE that stacks with their reduced price offers. It's a limited offer for this week only, so hurry to take advantage of it!

While Plusnet have dropped into fourth place, their average download speeds have actually improved by 1.47Mb, taking them to 14.13Mb. Similarly, Sky have dropped to fifth place, but have a 0.86Mbps increase in download speeds, averaging at 11.2Mb. As spring arrives with sunnier weekends and brighter evenings, we'll likely see further small increases across all providers as peak time congestion from video services reduces due to more people en. The availability of higher speed fibre services also continues to roll out to more exchanges.

December 2012 saw average download speeds recorded by users of our Broadband Speed Test rise by more than 2Mb in comparison to the results from November, coming in at 19.37Mb. Average upload speeds saw a smaller increase, coming in at 2.33Mb.

Plusnet came in at 3rd place with an impressive 3.9Mb increase to 11.94Mb average download speed. Plusnet also achieved the fastest average upload speed of any provider, coming in at 3.62Mb. These increases are likely due to a greater number of customers switching over to Plusnet Fibre, combined with improvements in Plusnet's traffic management policies launched in December.